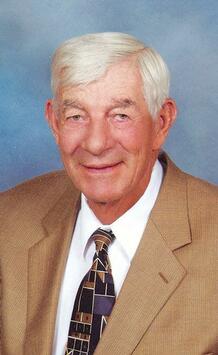 Marvin worked as a farmer for most of his life, and raised cattle in Hamilton County. He worked as a truck driver until retirement, and was a member of the Mennonite Brethren Church in Henderson, where he enjoyed running the sound system, and sang in the Men’s Chorus. On Feb. 28, 1951 Marvin was united in marriage to Elda Quiring in Henderson.
Marvin is survived by his wife, Elda Peters of York; sons, Mike (Ruth) Peters of Hampton and Kevin Joe (Robin) Peters of Los Angeles, Calif.; daughter, Treva (Inderjit) Uppal of North Platte; son-in-law, Allen Regier of Omaha and brother, Larry (Lu) Peters of Livonia, Mich. He is also survived by his grandchildren, Andrew Regier of Kansas City, Mo., Jeff Regier of Lincoln, Kelli Peters of Aurora, Jessica Peters of Milford, Jesse Uppal and Samantha Uppal, both of North Platte and Eliza Peters of Los Angeles, Calif.; great-grandchildren, Holly Peters of Milford, Tyler Regier of Kansas City, Mo., Blake Regier and Brooklyn Regier, both of Lincoln.

He is preceded in death by his parents; daughter, Linda Regier; sister, Joan Peters and brother, Richard Peters.
Memorial services will be held at 10:30 a.m. Friday, Oct. 27, 2017 at Mennonite Brethren Church in Henderson, with the Reverend Luke Haidle and Aaron Phillips officiating. Visitation will be held from 1 - 9 p.m. Wednesday, Oct. 25, and 9 a.m. – 9 p.m. Friday, with the family greeting friends from 7 - 8:30 p.m. Thursday at the mortuary in Henderson. Memorials may be directed to the Mennonite Brethren Church.
​
Condolences may be emailed to Metz Mortuary Messages will be given to the family.
Find our featured Mortuary in Family Services, Funeral Services and Grievance Services featured as a York, Nebraska Business in York Marketplace.
Location: Metz Mortuary | 109 South Lincoln Ave | York, Nebraska 68467 | Phone: 402-362-3351