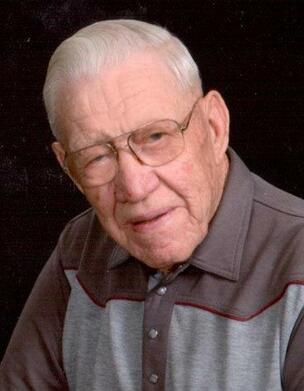 He was born July 19, 1928 at Garrison to Carl and Grace (Gue) Hoeft. On April 16, 1949 he was married to Viola Schall, and to them three children were born, Ron, Jamie, and Tim. Bud was a long time truck driver for McCallister Transfer and Bee Line for 45 years. He was a long time member of the York Elks Club, enjoyed camping, gardening, and riding his Honda Goldwing.

Funeral services are scheduled for 10 a.m. Wednesday, July 27, 2016 at the First United Methodist Church in York with the Reverend Art Phillips officiating. Interment will follow at the Greenwood Cemetery in York. Visitation will be held Monday from 1 – 9 p.m. and then all day Tuesday from 9 a.m. – 9 p.m. at the mortuary with his family greeting friends Tuesday evening from 6:30 – 8 p.m. at the mortuary. Memorials are suggested to the First United Methodist Church, the American Cancer Society, or to the Alzheimer’s Association.​