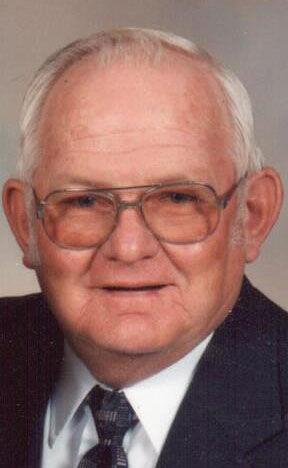 Marlyn “Marley” Odean Ellis, age 85, lifelong resident of York, went to his heavenly home on Jan. 27, 2017 surrounded by his family.

He was born Sept. 6, 1931 to Raymond and Emma (Hiebert) Ellis. On April 30, 1938 he was baptized at the First Presbyterian Church of York. Marlyn was a graduate of York High School, where he was a letterman in football, track and field, and was the class of 1950 Homecoming King.

On Jan. 1, 1953 he was united in marriage to Verleen Jones, daughter of Kenneth and Sophia (Seberger) Jones. Together they raised a family of four sons and a daughter.

He was confirmed on May 29, 1955 at Emmanuel Lutheran Church in York, where he remained a member for 62 years.

In his early years, ‘Marley’ as he was known by friends and family, could be found most weekends zipping around local dirt tracks in his #31, 1932 Ford coupe. He loved his ‘Blue River Blue’ blue tick coonhounds which he bred, raised, trained, and competed with, winning several national championships and his pups could be found in 48 states. One of his fondest memories was being joined by Roy Rogers at a celebrity hunt competition. He enjoyed anything sport related, and spent years coaching boys baseball, and girls softball.

In 1951 Marley started working at the Holcomb Hatchery, buying the hatchery in 1958. The family business was in operation for 35 years, closing its doors in 1993. After his ‘retirement,’ Marley stayed busy. He was custodian at Emmanuel Lutheran Church for 17 years, and also worked at Pioneer Seed Company.

He is preceded in death by his parents; brothers, Gaylord and Laurel and his sister, Lola Peterson.

Memorial services will be held 2 p.m. Friday, Feb. 3, 2017, at the Emmanuel Lutheran Church in York, with the Reverends Mike Neidow and Ben Kaiser officiating. Inurnment will follow in the Greenwood Cemetery in York.

Marley has been cremated so there will be no viewing or visitation.

Memorials may be directed to Emmanuel Lutheran School for their athletic department. ​