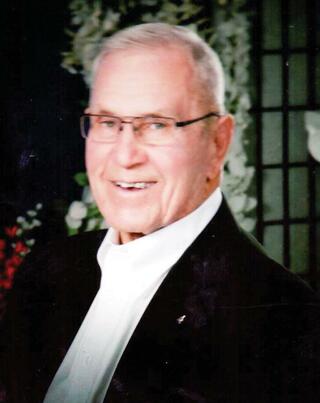 He attended Plainview School in Seward County for two years and then transferred to Gresham Public School. He graduated from Gresham High School in 1943, and then helped his father on the farm until August of 1944 when he enlisted in the service.  He landed in Europe on his 19th birthday. He served in “L” Company of the 94th Infantry, when the division was assigned to General George S. Patton’s Third Army and was a combat veteran of the Battle of the Bulge, serving in the Saar-Moselle Triangle area.

Following the war he was a guard at the Czechoslovakian-Russian border, played football for the 376th Regiment, and was then transferred to the 1st Infantry Division in Nurnburg where he served as a guard at the Nurnburg Trials.  He returned to Gresham on July 6, 1946, where he farmed with his father and brother.

Mark married Jennie Ellen Hohnbaum on Aug. 5, 1951 at the Waco Methodist Church. They made their home on the farm northeast of Gresham where they still reside. Mark farmed his entire life, and loved the land and his profession. In later years he remained on the home farm and enjoyed working in his shop and helping his sons farm. Mark always said “farming has been good to me.”

He was a member and served as Worshipful Master of Morning Star Lodge # 197 A.F.&A.M. of Gresham and then transferred to the Stromsburg Masonic Lodge #126 where he continued membership for 64 years, and was a member of the Scottish Rite and the Sesotris Temple of Shrine.

He joined the staff at the First National Bank (now Cornerstone) in York on Jan. 1, 1975 and served as an agriculture loan officer for 2 ½ years and then served on the bank’s Board of Directors from 1977 to 1996, and served on the board of the York Community Foundation.

Mark enjoyed fishing in Canada and the Northwest Territories and he and his wife Jennie also enjoyed traveling, being able to visit all fifty states and traveled on six continents. Part of their winter months were spent in Arizona. He enjoyed sporting events and was an avid Nebraska Cornhusker fan and held football season tickets since 1959. Most of all he was devoted to his family and enjoyed attending events in which his children, grandchildren and great-grandchildren participated.

He was preceded by his parents; two sisters, Gladys Paulick and Esther Schultz and brother, Melvin Romohr.

Funeral services will be held at 10:30 a.m., Tuesday, April 5, 2016 at First Presbyterian Church in York. Burial will be held at 2:30 that afternoon at the Waco Cemetery with military honors by Davidson-Neujahr Post #13.

Visitation will be 1 p.m. - 9 p.m. Sunday and 9 a.m. - 4 p.m. Monday at the mortuary. The family will greet friends from 6:30 - 8:30 p.m. Monday evening at the First Presbyterian Church in York. Memorials are suggested to the Shriner’s Hospitals for Children, the Masonic Eastern Star Home for Children at Fremont or in care of the family for further distribution.​