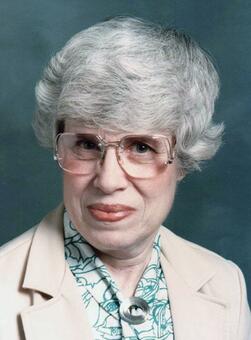 She was born Aug. 29, 1923 in Holt County to Lee Roy and Nellie G. (Bryant) Zellers. Marjorie graduated from Page High School in Page. She then received her teaching certificate and taught in a rural Holt County School. Marjorie was united in marriage to James C. “J. C.” King in Tarpon Springs, Fla. on March 3, 1946.

In October 1999, she married Elmer Braman. They made their home in Shelton. He died in 2004. Marjorie moved to Kearney in 2004 and has been a resident of Mother Hull Home since January 2010. Marjorie was very active in the Rebekah Lodge for over 50 years, holding most offices on the local and state level. Her hobbies included reading, sewing and quilt making.

Left to cherish her memory are two daughters and their husbands, Nelta and Dan Melton of Kearney and Elona and John Howe of Monticello, N.Y.; grandchildren, Dani Sue and Pete Longoria of Kearney, Justus and Lori Melton of Riverdale and Stephani and Jasen Plocharczyk of Toano, Va.;  great-grandchildren, Rowdy and Ryder Melton, Samantha, Ethan and Alex Longoria and Olivia, Alyssa, Emily and Elizabeth Plocharczyk; sister, Della Heiss of Page; four nephews, Alvin Heiss and Kevin Heiss of Page and Kirk Rapp and Kent Rapp of Smithsboro, N.Y. and seven great-nephews.

Funeral services will be held at 2 p.m. on Saturday, Aug. 15, 2015 at the Metz Chapel in York with Pastor Dean Pofhal. Burial will be in York’s Greenwood Cemetery.  Visitation will be one hour prior to the service. Memorials may be directed to Mother Hull Home in Kearney or the Kearney Chapter of the Alzheimer’s Association, 4009 6th Avenue, Kearney, NE, 68845.​