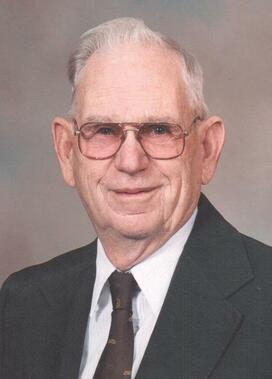 He was born July 14, 1918 in York to Charles and Minnie (Stevens) McNeill. He was married to Ardith Gunnell on Sept. 29, 1940 at Benedict. Ardith preceded him in death in March of 1978. Marion farmed in the York area until 1954 and then went to work for Charles Wolvin Lumber Yard. Prior to his retirement he worked at O.L. Clark Lumber Company as a finishing carpenter. Following retirement he took great pleasure in flower delivery and handyman jobs for McNeill Floral.

Marion was a member of First Presbyterian Church in York and the IOOF Lodge. He loved working in his garden and doing yard work. He enjoyed music, theater, playing cards, cattle and horses and was an avid Cornhusker football fan. He was a creative cook and baker and was his own worst critic. Marion treasured his family. Dale, Mary, Molly and Cooper could always count on “Grandpa” to help out whenever needed. He will be missed dearly by all who knew and loved him.

He is survived by his son, Dale McNeill of York; granddaughter, Molly McNeill and her son Cooper of York; special dog, General Patton; nieces, nephews and a host of friends.

Preceding him in death were his parents; wife; daughters, Marilyn and Janice; daughter-in-law, Mary and two brothers, Loyal and Gordon.

Funeral services will be held at 10 a.m. on Friday, Oct. 7, 2016 at First Presbyterian Church in York with the Reverend Mike Eickhoff officiating.  Interment will follow in York’s Greenwood Cemetery. Visitation will be from 1-8 p.m. Thursday at the mortuary with the family greeting friends from 6:30 - 7:30 p.m. Memorials may be directed to the family for later designation.​