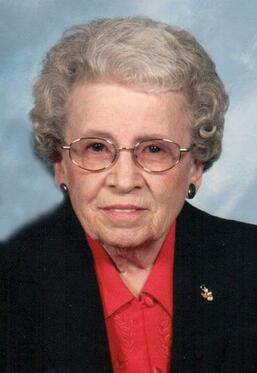 She was born June 14, 1925 to Dietrich and Katherina (Buller) Quiring at rural Henderson. On Oct. 11, 1944, Marie was united in marriage to Arnold Siebert at Henderson. Marie was a homemaker, but also worked as a cook at the Henderson Hospital.

Marie was a member of Bethesda Mennonite Church, the Gideon’s Auxiliary and the Women’s Mission Circle. She also enjoyed singing in the ladies choir, taught Sunday School, volunteered at 10,000 Villages in Seward and spent time visiting the elderly people for the church.

She was preceded in death by her parents; husband; four brothers, Dietrich, Henry, Pete and Aaron; her sister, Sara and son-in-law, Gary Tucker.

Graveside services are scheduled for 9:45 a.m., Tuesday, Jan. 20, 2015 at the Siebert Buller Cemetery in Henderson. Memorial services will then be held at 10:30 a.m. at Bethesda Mennonite Church, Henderson. Memorials may be directed to the Gideon’s Society or to the Bethesda Radio Fund.