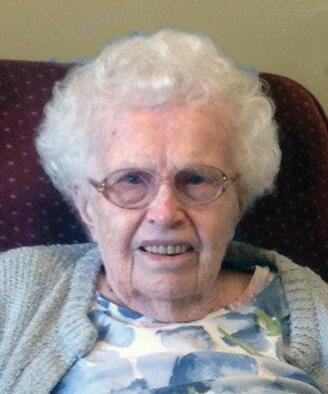 Marie Peters, mother, grandmother and great-grandmother was born on Dec. 23, 1914, to Cornelius and Katherina (Peters) Koop at their farm home near Henderson. She went home to be with her Lord on Oct. 19, 2014, reaching the age of 99 years.

She accepted Christ as her personal savior and was baptized on May 21, 1934 by Rev. John F. Epp. She joined the Bethesda Church where she remained a faithful member until her death, helping with Sunday school teaching and was an active member of Mission Circle I, working on the relief committee.

On April 20, 1941, she was united in marriage to Henry O. Peters, sharing almost 55 years of wedded bliss. To this union were born four children: Patricia, Eleanor, Linda and Larry.

Marie loved life on the farm and worked with her husband side by side. She was a hard worker and loved her garden as long as health permitted, sharing the fruits of the garden with friends and neighbors. They retired from the farm in 1977, moving to Aurora for four years and then housing opened up in Henderson where they enjoyed their retirement years.

She had a great concern for her family, always remembering them in her prayers. Marie and Henry enjoyed traveling as long as health permitted. She moved to Lincoln to a retirement center in 2008 to be near her family.

She was preceded in death by her husband, Henry; parents; sisters, Tina Janzen and Helen Regier and brothers Chris and Daniel Koop.

Graveside Services will be held at 10 a.m. on Saturday, Oct. 25, 2014 at Bethesda Cemetery in Henderson. Memorial Services will follow at 11 a.m. at Bethesda Mennonite Church. Visitation will be held on Friday from 1-9 p.m., at the mortuary in Henderson, with family greeting friends from 6:30-8 p.m. Memorial may be directed to Bethesda Mennonite Church or Bethesda Radio Broadcast.​
Condolences may be emailed to Metz Mortuary Messages will be given to the family.