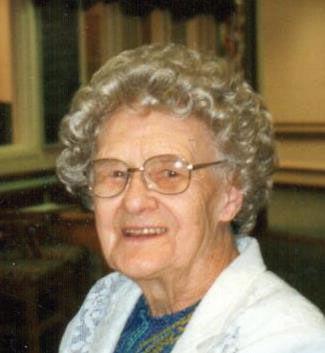 She was born to Abraham and Agathea (Peters) on May 22, 1916 on a farm southeast of Henderson. She attended Grade School at District 31. Maria was baptized by Rev. H. Epp and became a member of Bethesda Mennonite Church. Maria graduated from Grace Bible School in 1947. After graduation Maria and Edna Schultz served as missionaries with “Go Ye Mission” in Oklahoma for 15 years.

After Maria’s mother died, Maria and Edna moved back to Henderson and became involved with children’s ministry, teaching after school Bible classes, teaching Vacation Bible schools, and helping at Bible Camps. For 18 years they were managers of the Story Time Bus, a 42 passenger bus which was their mobile home as they traveled to different communities ministering to children.

In 1979 they moved to the Good Samaritan Village in Hastings. Maria worked in the housekeeping department in the nursing home, and later in the dietary department. After retirement, Maria spent many years doing voluntary work at the village. In 2001, she was named “Volunteer of the Year” by the NE Health Care Association, and also the Good Samaritan Volunteer of the Year.

It was with great joy and satisfaction for her to teach the word of God to 30-40 children a week in the Children’s Day Care at The Village. In September of 2012, Maria moved to the Henderson Health Care. There she appreciated the care of the staff at the Home.

Survivors include Edna Schultz and a host of nieces and nephews.