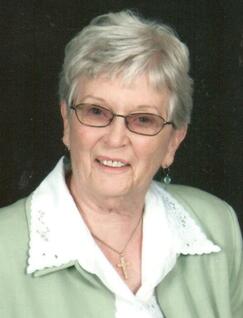 Margaret M. Heine passed away on Sunday, Feb. 22, 2015 at the High Plains Care Facility in Lincoln.

She was born July 5, 1928 in York where she met and married her high school sweetheart Robert Heine on Dec. 7, 1947. She was the daughter of Robert and Alma Campbell.

She is preceded in death by her parents; her in-laws, Jack and Elsie Heine; husband, Robert; brothers, Thomas and Richard Maneely; and her son-in-law, Timothy Anderson.

Margaret was a devoted Christian and a lifelong member of Emmanuel Lutheran Church in York. Her passing will leave a great void to those who knew her and loved her.

Funeral services will be at 10 a.m. on Monday, March 2, 2015 at Emmanuel Lutheran Church in York. Visitation will be from 1-9 p.m. Saturday and Sunday at the mortuary with the family greeting friends from 3-5 p.m. on Sunday. A lunch will be served at the church following the funeral service. Inurnment will be private with family. In lieu of flowers, memorials can be sent to the family to be designated at a later date.​