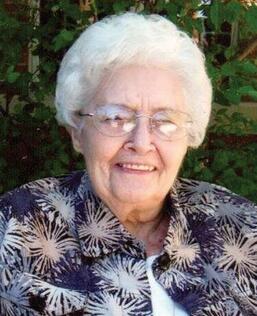 She was born Nov. 18, 1920 in Menominee to Theodore Joe and Mary Ann (Meyer) Schmidt. Lu and Ervin J. Bonertz were united in marriage on April 2, 1940 at Menominee. The union was blessed with one son, Allen and four daughters, Joy, Janice, Jean and Judy. The family lived in Cedar and Rock counties until moving to Grand Island in 1967. Their final move was to York in 1996. Lu worked in the ammunitions plant for five years and was a laundress in nursing homes for 26 years. She was a longtime member of Blessed Sacrament Catholic Church in Grand Island and presently a member of St. Joseph Catholic Church in York. She was a member of the Altar Society in York and Grand Island and the Legion of Mary.

Preceding her in death were her parents; husband; sister, Darlene Lammers; brothers, Stanley and Virgil and six infant brothers.

A Rosary will be said at 7 p.m. Monday at Metz Mortuary with the family greeting friends one hour prior to the rosary. Memorials may be directed to St. Joseph Catholic School in York.​