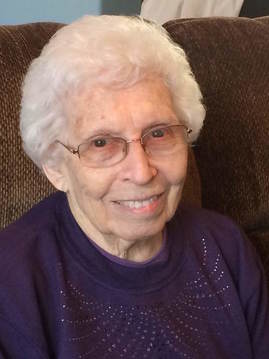 On April 12, 1944, Luella was united in marriage to Leroy Albert Pettey in York.  They lived and farmed north of Bradshaw, until moving to Bradshaw in 1975.  Luella was a member of the Bradshaw United Methodist Church. She was also a charter member and officer of the Bradshaw V.F.W. Ladies Auxiliary for over 60 years, of which she was a Gold Star Member.

Whatever leisure time she and Leroy had away from farming responsibilities was spent at their cabin, which they built themselves, along with friends and family, at Sherman Lake in 1964. After retirement they enjoyed following Husker Football and traveling. She was also an avid fan of Husker Volleyball. Together they spent many winters at South Padre Island and enjoyed socializing with friends and fishing. Some of Luella’s many hobbies included reading, gardening, crossword puzzles, needle work, playing cards and jigsaw puzzles.

She was preceded in death by her parents, husband, twin daughters, brother Virgil Wagner, and daughter-in-law Sandra Pettey.

Funeral services are scheduled for 10:00am, Tuesday, July 24, 2018 at the Bradshaw United Methodist Church. Interment will follow at Greenwood Cemetery, York. Visitation will be held on Monday, July 23 from 1-8pm at the mortuary, with family greeting friends that evening from 6-8pm.  Memorials may be directed to the Bradshaw United Methodist Church, Tabitha Home Health Care, or family preferences.