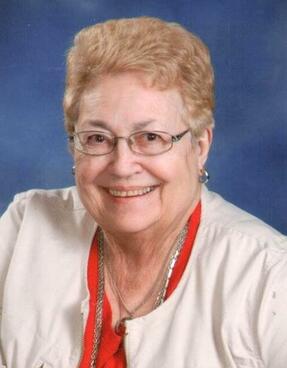 She was born July 7, 1937 at David City to Howard and Mildred (Cooper) Howser. Following graduation from Howells High School, Lucille attended and received her nursing degree from Creighton School of Nursing.

Lucille and Joseph M. Kuzelka were united in marriage on Nov. 29, 1958 at Howells. Four children, Steve, Gail, Julie and Tom, were born to the union.

For most of her career, Lucille was a recovery nurse at York General Hospital. She was also the school nurse at St. Joseph Catholic School and Epworth Village. She was a member of St. Joseph Catholic Church in York where she played the organ and the guitar.  She also taught guitar lessons and CCD (god parenting classes).

Lucille served on York’s Kilgore Library Board, was a member of the York Artist Guild and active on the State Artists Guild Board. She was also a patron of the Yorkshire Playhouse. She enjoyed playing bridge, bowling, golfing and traveling.  She loved cooking and baking, and spending time with her family.

A Rosary service will be held Thursday at 7 p.m. at the church. Memorials may be directed to St. Joseph Catholic Church or School or to the family for later designation. Visitation will be from 5-9 p.m. Wednesday and from 9-4 p.m. Thursday at the mortuary.   ​