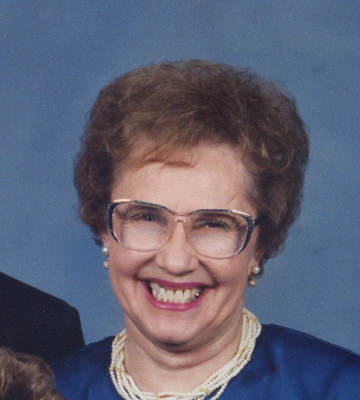 Lorraine worked for a medical doctor, who happened to deliver her daughter Konda, in Norfolk, NE and was very active in her husband's practice. Lorraine was active in her church. First Presbyterian, serving as elder, a member of Presbyterian Women and helped in many other ways. She was involved in various organizations in the community-York Mrs. Jaycees, PTA, Daughter of the Nile, York General Hospital Auxiliary, chicken feed chairman for the York Area Senior Center, Nebraska Safety Council and was the hospitality chairman for the Miss
Nebraska pageant when it was in York.

As a young woman she loved to roller skate, bowl, work on crafts, sew (she sewed all of Konda's clothes as a girl), and read. She always enjoyed her relationship with her Class of 1947 of Wayne High. A special group of gals would visit her after she couldn't go to the reunions and boy did they have fun. She was collector of teapots, dolls, Snow White and after her stroke her buddies were ladybugs. She was always known for her nails, every weekend she would do her nails and they were always just so.

Lorraine's family was very special to her. Loved to shop and do crafts with her daughter and her special Grandson was the apple of her eye. They would cook, bake, play games and read one certain book over and over. When Benton was learning to talk he called us all by a name but never would call his Gram anything. So finally, when he did, he called her “That”, I guess we would ask him who is that and he thought her name was “That”. She was proud of the name “That”. Gram did not like cats but Benton always made sure she got some type of cat for her gifts.

Lorraine loved their home in Colorado spending the summers out there just taking it easy. Unfortunately, in 2001 she suffered a stroke out there. We brought her back to Nebraska in the back of a funeral van and her life was
changed forever. She lived at home for a few years and then lived at assisted living and tried very hard to have a normal life. We are so lucky to have had her for those extra 17 years.

Funeral services for Lorraine and Dr. James Stansberry are scheduled for 10:00 am, Thursday, August 30, 2018 at the First Presbyterian Church in York with the Reverend Dr. Michael Eickhoff officiating. Inurnment to be held at a later date in Norfolk, NE. Visitation will be held from 5-8 PM Tuesday and 9 AM – 8 PM on Wednesday, with the family greeting friends from 6-8 PM on Wednesday evening at the mortuary. Memorials may be directed to the York Area Senior Center, or to the First Presbyterian Church Memorial Foundation in York.