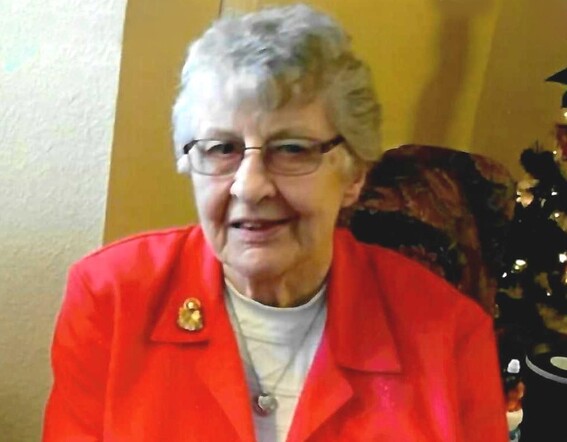 Lorraine E. (Brunssen) Meyer, age 89, of York passed away January 7, 2023 in York. She was born April 22, 1933 in Randolph, NE to Herman and Alvena (Thaden) Brunssen.  She attended County School District 38, Cedar County through eighth grade.  She graduated from Randolph High School in 1950.  After helping on the farm through the summer, she attended Norfolk Business College and worked part time in Norfolk as a stenographer.  After graduation from college, she was employed at Securities Finance Corp. in Norfolk as a stenographer, cashier, and loan clerk.

On January 10, 1953, Lorraine was united in marriage to Paul B. Meyer at Pierce, NE. They were blessed with six children, Michael, Paula, Loren, Daryl, Karen and David.  They moved to York in May 1954.   Lorraine helped Paul with his appliance store prior to working at Dale Electronics as a timekeeper until the plant closed.

Lorraine enjoyed helping with Cub Scouts and Girl Scouts.  Lorraine and Paul enjoyed traveling, taking many trips in their motorhome.  She raised a large garden and spent many hours canning and freezing the harvest.  Lorraine loved cooking, baking and sewing.

Mass of Christian Burial will be held at 10:00 am, Wednesday, January 11, 2023 at St. Joseph Catholic Church in York with the Reverend Father John Sullivan officiating. Lorraine’s service will be livestreamed at www.youtube.com/channel/UCl1ffBwglpCqu7nKkx42SzQ. Interment will follow in St. Joseph Cemetery, east of York. Visitation will be from 1-8:00 pm on Tuesday with her family greeting friends from 6-7:30 pm that same evening at the mortuary. In lieu of flowers, memorials may be made to the Alzheimer's Association. Metz Mortuary in York is handling arrangements.