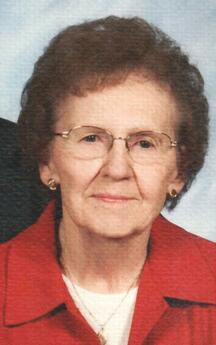 Lillian and C.A. “Cornie” Mierau were united in marriage in Henderson on May 4, 1944 and they lived and farmed in the Henderson area. Four children were born to this union, Donald, Diane, Janet and Jeanne.

Lillian worked alongside her husband on the farm and for several years as a waitress/cook at the Dutch Kitchen in Henderson. She was a member of Bethesda Mennonite Church in Henderson, Missions Circle, Hospital Women’s Auxiliary, was an excellent seamstress and enjoyed being surrounded by her family.

Graveside services will be held at 9:45 a.m. Tuesday, Feb. 10, 2015 at the Bethesda Cemetery, Henderson followed by memorial services at 10:30 a.m. at the Bethesda Mennonite Church. Visitation will be from 1-9 p.m. Sunday and Monday at Metz Mortuary in Henderson. The family will be present to greet friends Monday evening from 7 - 8:30 p.m.  Memorials may be directed to the MCC Canner. ​