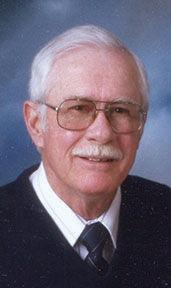 Levi was born Jan. 29, 1934 at the Farmers Valley Township to David and Elizabeth (Buller) Regier. On Oct. 28, 1958, Levi married Patricia Ratzlaff, and to them, two children were born, Dennis and Dawn. Levi worked for the telephone company in Henderson, and was known for being a perfectionist in his work. He was a volunteer firefighter and EMT in Henderson. Levi loved to ride his motorcycle with Patricia, as they made many road trips throughout the United States and Canada. But most importantly, he loved his grandchildren, and he devoted his life to them.

He is preceded in death by his parents; one grandson, Kevin; daughter-in-law, Lee Ann and his brothers, Pete Regier and David Regier, Jr.

Funeral services will be held at 2 p.m. on Thursday, Aug. 25, 2016 at the Bethesda Mennonite Church in Henderson. Interment will follow services at the Mennonite (Buller) Cemetery. Memorials may be directed to the family for later designation. Visitation will be from 1-9 p.m. Wednesday at the mortuary in Henderson with the family greeting friends that evening from 6:30 – 8 p.m.   ​