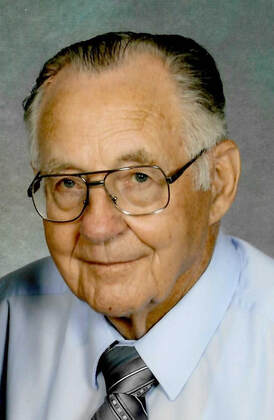 Visitation will be held at Metz Mortuary, Henderson, NE on November 7 from 1:00 to 8:00 p.m. The family will be at the mortuary to greet guests from 7:00 to 8:00 p.m. A memorial service will be held at Bethesda Mennonite Church in Henderson, NE on November 8 at 2:30 p.m.  The memorial service will be preceded by a public graveside service at Bethesda Cemetery, Henderson, NE at 1:45 p.m.  Rev. Andrea Wall and Rev. Seth Miller will officiate.  The service can be viewed by going to https://Bethesdamc.org/watch-live.  In lieu of flowers, memorials may be made to Bethesda Mennonite Church (livestream and radio ministries).

Levi P. Peters was born on August 21, 1927,  to Leonard and Sarah Siebert Peters on a farm near Stockham, NE. He lived on this same farm, except for three months, until he retired in 1991. He attended country school a half mile from his home through eighth grade and attended two winters of Bible School in Henderson.  He was baptized by A.W. Friesen on May 20, 1945, and was a member of Bethesda Mennonite Church until his death.  He was a farmer from age 16 until age 62. On August 6, 1950, he was united in marriage to Leanna M. Ratzlaff. They were married for 72 years. Together they had four children, 15 grandchildren and 13 great-grandchildren.

Levi volunteered with the Mennonite Disaster Service for many years and, together with Leanna, enjoyed doing volunteer service throughout the U.S. and Mexico.  He had an advanced amateur (“ham”) radio license and enjoyed collecting and restoring antique tractors.

Levi’s family would like to thank the staff from Legacy Square and Henderson Health Care for the excellent care they provided him for the past seven years.
​
Condolences may be emailed to Metz Mortuary Messages will be given to the family.
Find our featured Mortuary in Family Services, Funeral Services and Grievance Services featured as a York, Nebraska Business in York Marketplace.
Location: Metz Mortuary | 109 South Lincoln Ave | York, Nebraska 68467 | Phone: 402-362-3351