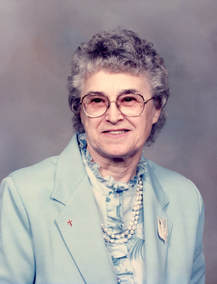 Lela B. Knuth, age 94, of York, NE died Sunday, April 22, 2018 at York, NE.
She was born February 19, 1924 southwest of Utica, NE to Joseph and Bertha (Hennings) Schmidt. On October 5, 1947 she was married to Clarence A. Knuth at Utica. Together they farmed near Utica till the spring of 1954 when they moved to a farm which was her home till May of 1988. She then moved to York where she was a longtime member of Faith Lutheran Church. Lela loved to quilt, tend to her garden, crocheting and raised chickens as an active farm wife. Her specialty was making Angel Food cakes for her family. She also enjoyed the York Senior Center, was an avid recycler, sewed her families clothing, canned most of her garden produces and was a hard worker her whole life.
She is survived by her daughter Susan E. (David) Zlomke of York, granddaughter Misty M. (Travis) Mooney of Hampton, NE., step-grandson Brian (Celine) Zlomke of Grand Island, NE; Great grandchildren include Ian Raric, Kale and Trinity Mooney and her step great-grandchildren are Alexis, Kaleb and Eliana Zlomke.
She was preceded in death by her parents, husband Clarence, her son John, son-in-law David M. Raric, 3 brothers and one sister.
Funeral services were held at 10:00 AM, Friday, April 27, 2018 at Faith Lutheran Church in York with the Reverend Dr. Heath Trampe officiating. Interment in Greenwood Cemetery at York. Memorials may be directed to the Hampton Public School.