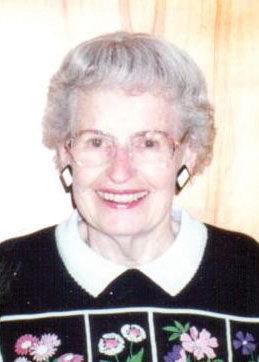 She was born at Bradshaw on July 19, 1923 to Henry and Laura (Grudinger) Schall. She graduated from York High School in 1941 and graduated from Lincoln School of Commerce in 1942.

Lela was united in marriage to Lloyd Eberle on Feb. 14, 1946 in Lincoln. Lela was a long time secretary, working in Lincoln, Milwaukee, Wis. and Denver, Colo. in WWII and later at the York County ASCS-FSA office.

Lela was a member of the First United Methodist Church. She was active in Womans South Central Council, Epworth Village Volunteer, and Bradshaw V.F.W. Auxiliary.

She was preceded in death by her husband, Lloyd; sisters, Gertrude and Vla Mae and grandson, Kyle Sandrock.

Funeral services are scheduled for 10 a.m. Thursday, March 19, 2015 at Metz Chapel. Burial will follow at Arborville Cemetery, southeast of Polk.

Visitation will begin at 1 p.m. Tuesday and family will greet friends on Wednesday from 6 – 8 p.m. at the mortuary. Memorials may be directed to the family for later designation. ​