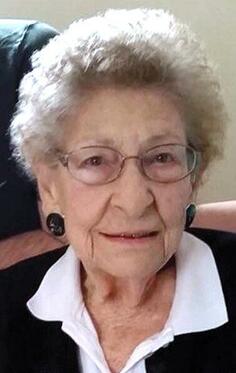 She was born Jan.19, 1920 at Woodruff, Kan. to Arley Edgar Hageman and Florence (Bradley) Hageman. She was a bookkeeper for Montgomery Wards in McCook and Denver, Colo. Her enjoyment came with genealogy, bird watching and the coffee club in Superior. She played on a girl’s baseball team; she loved to dance especially Ballroom, played piano and was a member of a small local band with her sisters. On Jan. 31, 1942 she was married to John B. Brandt at Oberlin, Kan.

She is survived by son, John W. (Kami) Brandt of Ogallala and his children, Suzie (Aaron) Dexter of Thornton, Colo., Logan and Jacob Dexter; Jodi Deaver of Denver, Colo. and her children, Arianna, Elliana, Alliyah, Chelsea and Regie; Jonathan (Mimi) Brandt of Kearney, their children Jonas Burton Brandt, August Emerson Brandt and a great-granddaughter to be born in May; Daughter, Joyce (David) Samson of York and her children, Jay Nelson of Bradshaw and his friend Deb Bray; Jill (Randy) Shaw of Crete and their children, Tyler (Katy) Shaw and their baby daughter, Collins Rosella Shaw of Pleasant Dale, Tristan Shaw and Taryn Shaw both of Crete; Jackie (Clay) Bittinger of Henderson and their children Tori Bittinger and fiancé Kendall Gierhan of Utica and Jordan and Ashley Bittinger of Lincoln. Laverna was blessed to hold and enjoy her great-great-granddaughter, the fifth generation; son, Jim (Faith) Brandt of Colorado Springs, Colo.

She is also survived by her brothers, Glenn (Jeanne) Hageman of Denver, Colo. and Wayne (Lois) Hageman of Torrington, Wyo. and a sister, Marylou Hartzog of Ogallala, many nieces, nephews, and their families, along with their Texas and Nebraska friends.

Funeral services are scheduled for 2 p.m. Saturday, April 22, 2017 at the Metz Chapel in York with the Reverend Art Phillips officiating. Burial will be in York’s Greenwood Cemetery. Visitation will be held from 1 to 8 p.m., Friday. Family will greet friends one hour prior to services Saturday. Memorials may be sent to the family for later designation.
​
Condolences may be emailed to Metz Mortuary Messages will be given to the family.