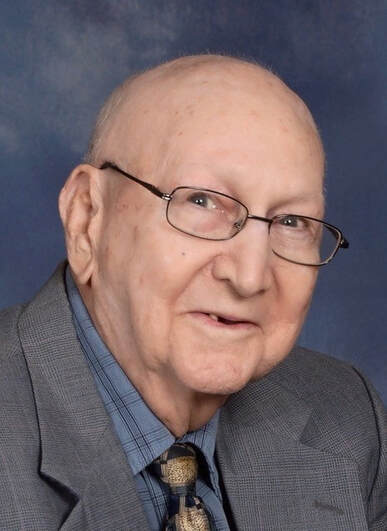 Laurence Leslie Allen, 98, of York, died June 16, 2022, at the Providence Medical Center in Wayne Nebraska.  He was born September 20, 1923, in York to Everett L. and Beulah E. (Chambers) Allen. On June 8, 1947, Laurence married the love of his life, Esther L. Spalding at the Wayland Church northwest of Gresham.

Many knew him as “Squeak,” and wouldn’t have recognized his given name, Laurence.  Apparently, he had a bit of a squeak at some point in his youth, and the nickname stuck.  But he overcame that squeak and sang in a high school quartet.  His voice was still beautiful at 98 when he joined in hymn singing during worship at Kinship Pointe where he lived in Wayne from 2020 until his death.

Laurence was a farmer when they married and remained a farmer until his oldest daughter graduated from high school.  He then left farming to work for a few years as janitor at McCool Jct. Public Schools where he was already known and beloved by the students because he had been driving a bus route for over a dozen years, transporting them to and from school and extra-curricular activities.  He had many stories to relate from those days on the school bus.  Until the day he died he kept a small school bus as a reminder of those days.

Upon leaving work with the school, he started the job he most loved, working at Mead Lumber for some 20 years.  He enjoyed working with the people and helping them with their construction needs.

After his retirement from Mead Lumber, he took up a post-retirement job at Super Wash, telling his employer that he would accept the job as long as it didn’t interfere with his retirement.  In 1998 he was nominated (by the local owner) and awarded (by Super Wash, Inc.) the Earl Bryson Memorial Award Honorable Mention for “excelling at ‘meeting and greeting’ customers with a glad heart, going beyond the call of duty and always exhibiting ‘the Golden Rule’.”

Laurence was a member of First Presbyterian Church in York where he served many terms as ordained elder.  He also served on the memorial foundation, right up until his death.  He was a faithful giver all of his life.

He was also active in the Walk to Emmaus community.  He was transformed by the Emmaus experience and became an even more gentle and loving man as his faith grew larger.  It was at an Emmaus weekend where his youngest daughter (Kathleen) first heard him tell the story of Leslie Elizabeth encouraging him shortly before her death at the age of 2 ½.  When she was sitting on his shoulders, she felt tears on his cheeks and said, “Why are you crying Daddy?  This is just the little house I live in.”

Laurence was a carpenter, handy with his hands.  His family members cherish the wooden gifts he made for them in his retirement years. He made several wedding gifts of the wedding couples’ names and wedding date cut out of wood.  He also made many cut-outs of the name “Jesus” in the shape of a fish, among other things.

He was preceded in death by his wife, Esther Lucile (Spalding) Allen, their daughter Leslie Elizabeth; and one sister Alma Wolstenholm.
​
Funeral services will be at 11:00 a.m. Tuesday, June 21, 2022 at First Presbyterian Church in York with the Reverend Dr. Mike Eickhoff officiating.  A lunch will follow at the church. Private family interment will take place later. Visitation will be held one hour prior to the service. Memorials may be directed to the family for later designation. The service will be streamed live on Metz Mortuary’s Facebook page.
​​