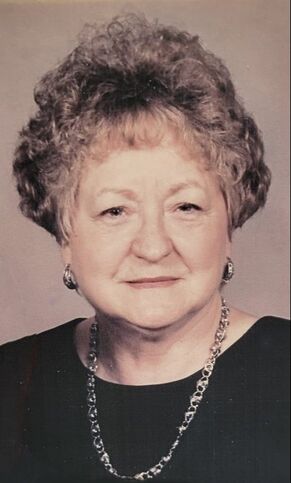 Laura Mary Young, age 84 of York, NE, died Wednesday, March 30, 2022 in York. She was born on October 25, 1937 to Marion and Burnice (Moore) Roberts in Paxton Springs, New Mexico, she always said ‘under a tree’.  She graduated from Grants, New Mexico High School in 1956. Mary was united in marriage to John Young on May 28, 1956. After living in New Mexico for a couple years they moved to Nebraska. She had four children, Pamela, Debbie, John and Lori.

She worked at Sears, York Medical Clinic and York State Bank. Mary had many friends and you could always tell where she was sitting by the laughter coming from the area. She had quite the sense of humor.

She is survived by her daughter Pamela Young of York, son John (Barb) Young of Mesa, AZ, daughter Lori (Doug) Kerwood of Utica, NE, her grandchildren: Allison O’Neill of York, Kate (Troy) Watson of Orchard, NE, and Nick Kerwood of York, and her great-grandchildren Jaidyn O’Neill of York, Preston, Parker, Porter and Paisley Watson of Orchard. She is also survived by her sisters Jane Bridge of Albuquerque, NM and Dovie Martin of CO, her sisters-in-law Helen (Harlan) Schardt and June Compton of Manhattan, KS, Margaret Roberts of Milan, NM, and Barbara Moore of Gillette, WY, and many nieces and nephews.

Memorial services will be held at 11:00 a.m., Monday, April 4, 2022 at First United Methodist Church in York, with the Reverend Trudy Hanke officiating. Private family inurnment at a later date. It was Mary’s wish to be cremated, so there will be no viewing or visitation. Memorials may be directed to the family for later designation.
​
​Condolences may be emailed to Metz Mortuary Messages will be given to the family.
Find our featured Mortuary in Family Services, Funeral Services and Grievance Services featured as a York, Nebraska Business in York Marketplace.
Location: Metz Mortuary | 109 South Lincoln Ave | York, Nebraska 68467 | Phone: 402-362-3351