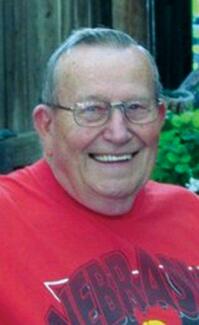 Larry was a longtime member of the First United Methodist Church in York, the York Elk’s Club and the Eagle’s Club.
He was an accomplished “sheet metal guy” after his many years in the heating/air conditioning industry as a former partner in York Heating and Air Conditioning.

Over the years, Moose had many hobbies and interests including bowling, fishing, golfing, Husker football, airplanes, and coin collecting. Everything Moose did, he did with gusto!
On July 26, 1959 he married Betty Berck in Stromsburg.

He is survived by his daughter, Lauri (Bruce) Reinhardt of Lincoln; his son, Mark (Sylvia) Lind of Crosby, Texas. His grandchildren include Emily (Adam) Goodman and their children Grace Bernadt and Aspen Goodman, all of Lincoln; Eric Reinhardt and his son Elijah, also of Lincoln; Samantha Kathol and her son Ben of Mustang, Okla.; Tabitha (Kenny) Podrazik and their children Ethan and Graham of Grimes, Iowa. Also surviving are brothers and sisters, Dan (Margaret) Lind of Grand Island, Kent (Carole) Lind of Eagle, Vaughn (Beverly) Berck of Hampton, Burdette (Delores) Berck of Gresham, Twyla (Richard) Hughes of Grand Island, Nola (Monte) Henkle of Broomfield, Colo.; and many nieces, nephews and a host of friends.
​
He was preceded in death by his parents; wife; an infant daughter, Barbara Kay; a brother, Mardell; and a sister, Mary.
The family would like to invite those attending the service to wear their favorite Husker shirt or other casual attire.
Memorial services are scheduled for 10 a.m., Thursday, June 29, 2017 at the First United Methodist Church in York with the Reverend Art Phillips officiating. A luncheon will follow services at the church. Graveside services will be held at 2 p.m., at the Stromsburg Cemetery. No viewing or visitation, however his family will greet friends from 6-7:30 p.m., Wednesday, at Metz Mortuary in York. Memorials may be directed to his family for later designation.