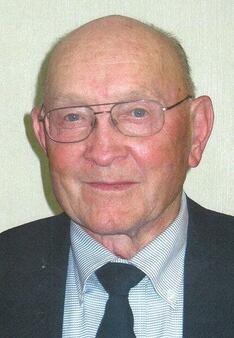 He was born on Oct. 21, 1928, in Schmiedeberg, Germany, to Richard and Amalie (Drescher) Heinze. He learned the trade of painting before emigrating to the United States in December 1951, to New Orleans, and then settling with other Germans in Thorndale, Texas.

He married Klara Emilie Verwied on Dec. 22, 1952, in Thorndale. While living in Texas, son, Rudi, was born. Upon his brother, Helmut’s arrival to the US, the brothers decided to move to New York, settling on Long Island. Here, son, Bernard, was born. As Kurt continued his painting career, he also built houses in the evenings. Upon selling his house in New York, Kurt and Helmut’s parents visited from Germany and the family took a tour of the United States. At the conclusion of the vacation, Kurt and Klara decided to move to Colorado, where the climate would be better for Rudi’s asthma. On the way to Colorado, they stopped in York to help out at Christian Unity Press, the publishing house for the German Church of God. The Lord healed Rudi’s asthma, and Kurt continued working a variety of jobs at Christian Unity Press.

In York, son, Dieter, was born. After 20 years of marriage, Klara suddenly died on Aug. 19, 1973. The Lord provided Magdalena Jaster to be his helpmate, and they were married on March 2, 1974. Son, Edwin, was born to this union. Kurt served at Christian Unity Press for 50 years, and enjoyed helping his boys with various endeavors. In the last years this involved farming and raising cattle. Serving the Lord, and family, were the priorities in Kurt’s life. His quiet, gentle, and servant’s heart, was evident to all.

Funeral services will be held at Arbor Drive Community Church, Saturday, Dec. 3, 2016, at 10 a.m. Interment will follow at York’s Greenwood Cemetery. Visitation will be Thursday from 1-8 p.m. and Friday from 9 a.m. – 8 p.m. at the mortuary with family greeting friends Friday evening from 6:30-7:30. Memorials may be directed to Christian Unity Press or Living Water Rescue Mission, York.​
Condolences may be emailed to Metz Mortuary Messages will be given to the family.
Find our featured Mortuary in Family Services, Funeral Services and Grievance Services featured as a York, Nebraska Business in York Marketplace.
Location: Metz Mortuary | 109 South Lincoln Ave | York, Nebraska 68467 | Phone: 402-362-3351