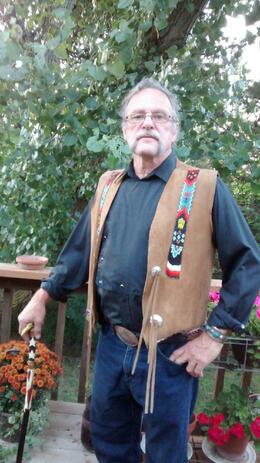 Kenneth L. Andrews, age 64 of Waco, died Tuesday, June 6, 2017. Kenneth Leon Andrews was born in Richmond, Virginia and graduated from Vocational High School in New Bedford, Mass. Ken proudly served in the United States Air Force as a cryptographer. After his service years he settled in Nebraska and earned his BFA at Bellevue College. He worked for many years as a commercial graphic artist and advertising manager with such notable companies Brandeis and Tires, Inc. Ken married Judy Barnes Wyant in 1985. They settled in Bellevue and raised two children and many dogs and cats there. Ken later became a professional truck driver and enjoyed his time on the road. He was a proud member of the Nebraska Czechs of York. Ken loved gardening and landscaping, wood carving and painting in many mediums.

Ken is survived by his wife Judy of Waco; daughters, G. Emma Wyant of McHenry, Ill. and Stacy Bair (Brian); grandchildren, Brian Bair, Jr., Anna Bair and James Bair of Omaha; his mother, Claire Andrews and sister, Susie Sylvia (Donald) of New Bedford, Mass.
​
Ken was preceded in death by his father, Edward Andrews and nephew, Edward Andrews II of New Bedford, Mass.
Friends and family will gather at the Yorkshire Playhouse on Friday, June 9 from 7 - 8:30 p.m. to remember Ken. Kenneth has been cremated, no viewing or visitation. Private family inurnment. In lieu of flowers, memorials may be directed to York Adopt-A-Pet or the Yorkshire Playhouse.