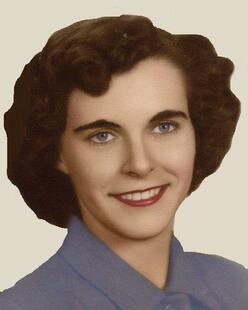 She grew up in Princeton raised by her Aunt Dorothy whom she called “mom.” She attended grade school in Princeton and graduated from Cortland High School in 1951. Upon graduation, she began working as a secretary for Woodmen Accident & Life in Lincoln. She was united in marriage to Robert Lewis (Lew) Sterns on Jan. 11, 1952 at Lincoln. To this union, two children were born, Robert and Cheryl.

Kathy was a member of Crounse Methodist Church and later, Malcolm Methodist Church where she was president of the women’s club for many years. Kathy and Lew lived and farmed near Malcolm until 1967 when they moved to a farm near Benedict where they continued to farm until retirement. Kathy was a long time member of the Benedict United Methodist Church and taught Sunday school for many years. She enjoyed being a homemaker, doing the bookkeeping for the farm, flowers and antiques, and mostly spending time with her family.

She was preceded in death by her “mom”; her parents; four brothers, Jack, Bill, Delbert and Ronnie Root; two sisters and their husbands, Bernice and Earl McCollough and Maxine and Milton Husa and grandson Adam Simonsen.

Memorials may be directed to the family for later destination.​