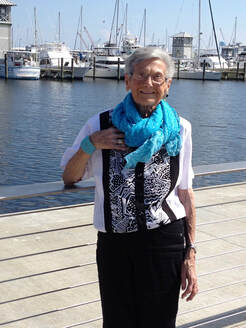 Rita June Walford of Everett, WA passed into the loving arms of her Lord on January 24, 2019. She was 92 years old. June was the second of two children born to James and Lucille Verner of Biloxi, MS. She grew up in Biloxi and attended Sacred Heart Academy. June met her husband, Bernard Walford, while he was stationed at Kessler Air Force Base in Biloxi. They were married in October of 1951. After Bernard finished his active duty they returned to the family farm in Gresham, NE. They lived on the farm until 1971 and then moved to Osceola, NE to run a small country club until 1973 when they moved into York, NE.

Once settled in York, June attended St. Joseph Catholic Church. She volunteered with St. Joseph’s Alter Society, blood bank, meals on wheels and Epworth Village. She was also a member of the American Legion Auxillary.

June was a Mississippi Southern Belle turned Nebraska farm wife. Throughout her life she portrayed her southern hospitality blended in with a Midwest work ethic. She loved Nebraska and farm life and the Cornhuskers. To help get the girls through college she took a job as dispatcher for York County Sheriffs and later a position as guard at the Nebraska reformatory for Women and retired from there in 1992 after 19 years of service. After she and her husband retired they would spend winters on South Padre Island, TX.

June moved to Biloxi, MS, near her son, in February of 2014 into an assisted living facility after having health issues and not wanting to live on her own anymore. Then in October of 2016 she moved to Everett, WA near her daughter.

June was preceded in death by her husband Bernard, her mother & father and her sister.

Our family extends our deepest gratitude to the staff at Bay Cove in Biloxi, MS and Brookdale in Everett, WA and Evergreen Hospice for the loving care they provided.

Mom we will miss you deeply but we are comforted in knowing that you are totally healed and that you & Dad are once again together dancing on streets of gold. We love you!

Inurnment will be held at 9:15 a.m., Saturday, April 13, 2019 at Cedar Lawn Cemetery in Gresham, NE. Mass of Christian burial to follow at 10:30 a.m., at St Joseph Catholic Church in York with the Monsignor James Reinert officiating. June has been cremated so there will be no viewing or visitation. Condolences can be left at the link below or sent to Deb Richardson at PO Box 1418, Stanwood, WA 98292.