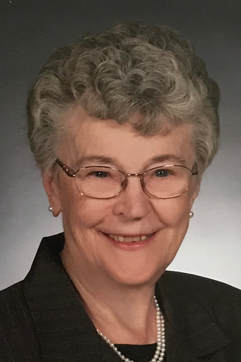 She was preceded in death by her parents and her husband of 62 years, Robert (Bob) Knipfel, and they
are joyously reunited in Heaven. She is survived by her children, JoAnn (Stan) Williams of Bella Vista,
Jean (Lester) Siebert of McCool Junction, NE, Don (Terese) of Bella Vista, Susan (Paul) Hurd of
Bellvue, WA and Nancy (Roger) Goodban of Kearney, NE and 12 grandchildren and 18 great
grandchildren. She is also survived by sisters in law Ruth Harrison of York, NE and Irene Utecht of
Hastings, NE and lifelong friends Melvin and Jo Reetz.

June was baptized at St. Johns Lutheran Church south of Waco and grew up in the loving care of her
parents on small farms in York County, NE. She was an only child who spent her early years playing
with children of close neighbors and riding her pony, Buddy. She enjoyed the many farm animals and
helping her parents with their many chores. These were dust bowl years and the children that grew up
on the farm in those years were a hardy lot! June's parents moved to a farm southeast of York, NE in
1942 and transferred their church membership to Emmanuel Lutheran of York. June finished her formal
education and continued to live at home and help on the farm. She enjoyed going to Walther League at
Emmanuel and it was there that she met Bob. Bob was smitten and a courtship ensued resulting in
marriage at Emmanuel on June 13, 1948. Bob and June were lifelong farmers in York County raising
their family on the Knipfel family farm southeast of York. After retiring from farming Bob and June
moved to York where June started a career at Wal-Mart retiring in 2011 after 20 years. She continued to
stay in touch with her Wal-Mart friends and enjoyed visiting with them in person or by phone after
moving to Arkansas.

June was a devoted wife, mother and friend who was an inspiration to her children and exhibited love
in all of her everyday actions. She was an accomplished seamstress sewing clothes for her children,
grandchildren and great grandchildren. After Bob's passing June moved to Bella Vista and established a
home there. She had her own ideas of what she wanted in her home and she transformed a house into
that home with her personal touch. She spent 5 years in the Ozark hills, enjoying the scenery and her
neighbors. She was a member of Messiah Lutheran of Pea Ridge, AR and loved the services there.
Pastor Mayer is a blessing to all who know him.

Emmanuel Lutheran Church played a great role in June's life; it was where she was confirmed, married,
where her children were baptized, confirmed and married, and where Bob and June had their funeral
services. All who knew June miss her presence here but are so thankful for knowing her! She is at
peace and lives with her heavenly family now and we are left with the memories of a wonderful woman
who exhibited Christian love every day.

Funeral services are scheduled for 10:00 a.m., Friday, June 15, 2018 at Emmanuel Lutheran Church in York with the Reverends Mike Neidow and Richard Mayer officiating. Burial will be in York’s Greenwood Cemetery. Visitation will from 1-8:00 p.m., Thursday with her family greeting friends from 6-7:30 p.m., that same evening at the mortuary. Memorials may be directed to the family for later designation.