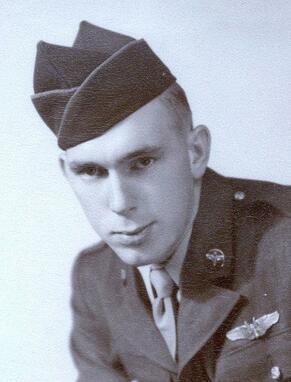 John Strickler, age 90, was born in New York, on a late spring Sunday, along Platte Avenue, in a house still existing today; a Sunday which saw Babe Ruth go three-for-four and score two runs as the Yankees defeated the Browns.

But the Babe was in St. Louis, and the New York we speak of was already long since, just York, by either name, a pretty good place to be in those days.

John was the eldest son of Harry Strickler and Lola Doak, and Richard was his little-brother. By the 1930s, the family moved to their compound on Greenwood Avenue. John matriculated at the west-ward Lincoln Elementary. He delivered the News-Times after school. He played marbles for sport, or for keeps, and was a city-wide champion. Always a swimmer, he swam at the York Beach, or the Y, or at the WPA pool on Hutchins Avenue. On Saturdays, when he could afford the dime, or had a coffee can twist-key token for admission, he attended matinee cliff-hangers at the York or Sun theaters. He rode with Kenny Mason, in Kenny’s Dad’s Dodge through the new Lincoln Avenue underpass, horn blaring. John helped his Uncle Everett with the cows at the Gould farm on the SYA highway. And he listened to Jack Armstrong, All-American Boy on the radio. John graduated from York High School, where he played tackle on a YHS football team populated with legendary Duke names like Moomey, Cooper, and Myers, and at half-time he marched in the band and played Sousaphone.

John enlisted in the Army Air Force. He served with the Eighth Air Force, principally at Kadena Field, Okinawa, where he crewed on B-29 as observer and gunner. John’s service path included, basic at Keesler Field, Biloxi, Mississippi, training at Fort Myers, Florida, assignment to Napier Field, Dothan Alabama, assignment to Columbus Army Air Field, Mississippi, assignment to Kearns, Utah, then overseas from Seattle, Washington, returning to the states via San Francisco, California.

While stationed at Dothan, John met Audrey Pynes, an operator for the local telephone company. The two continued a long distance romance before marrying and settling in York in 1952.

John hit the road after the war. For Meridian Transit Bus Lines, he drove a daily turn from Fairmont to Omaha via Stromsburg. John delivered Coca-Cola throughout York and surrounding counties for York’s Coke bottling plant. He was agent for the Trailways Bus Lines, and for Western Union in York, greeting arriving buses, selling tickets, moving baggage, delivering parcels, and sending, receiving, and delivering telegrams from his office inside the McCloud Hotel. John drove charter bus trips for Turner Bus Lines of Columbus. If you had a Turner skip-day bus trip from Benedict, Stromsburg, or Anselmo-Merna in the 1960s, there is a chance John drove your bus. John joined the U.S. Post Office in 1952 retiring as assistant postmaster in 1983. John the Congregationalist, sang in the choir, and was a member of the Baptist-Congregational Church.

John is preceded in death by wife Audrey, his parents, and brother Richard.  He is survived by son Rodrick and daughter-in-law Karen.

Committal services will be held at 10 a.m., Thursday, December 29, 2016 at the Metz Chapel in York. Interment will follow in York’s Greenwood Cemetery. Visitation will be from 1-8 pm Wednesday at the mortuary with the family greeting friends that evening from 7-8 p.m. Memorials may be directed to Greenwood Cemetery.​