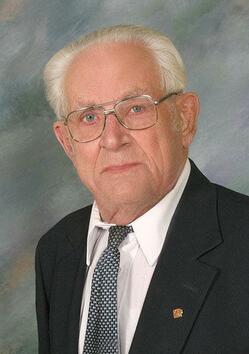 He was born Oct. 20, 1924 in rural Stockham to Leonard and Sarah (Siebert) Peters. On Aug. 28, 1949, John married Donna Dixon, and they were happily married for 66 years. To them two daughters were born, Deb and Patti. John worked as a Ford auto mechanic for over 40 years and was a member of First United Methodist Church in York. He gave his time in volunteer service during World War II, and enjoyed wood working, being at the family cabin at Sacks Lake, along with golfing and traveling after his retirement.

Funeral services will be held at 10 a.m. on Wednesday May 4, 2016 at First United Methodist Church in York with the Reverend Art Phillips officiating. Interment will follow services in the Greenwood Cemetery in York. Visitation will be held from 1 – 9 p.m. Monday May 2, 2016 and between 9 a.m. and 9 p.m. on Tuesday May 3, with the family greeting friends between 6:30 and 8 p.m. at the mortuary. Memorials are suggested to the First United Methodist Church Foundation or to the Alzheimer’s Foundation.​