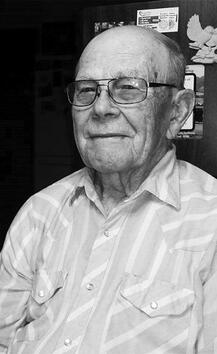 John (Bud) was born Oct. 1, 1924 in rural Bradshaw to John and Agatha (Ratzlaff) Kliewer and entered into the presence of Jesus Christ his Savior and Lord on June 24, 2017. John attended elementary school at District 27 and graduated from Henderson Community School in 1944. John trusted Christ as his Savior and Lord Sept. 26, 1946 and was later baptized upon his profession of faith. He was a member of Crossroads Bible Fellowship and served as teacher and elder for many years.
John married Matilda (Tillie) Fast Wiens on Nov. 28, 1947. With this union John gained a son Ferd who was one year old and then five daughters were added to the family: Susan, Joyce, Grace, Luann and Kathy. After Tillie passed away in 1986, John married Alice June Hochstettler on March 19, 1988. They have resided in Henderson since their marriage.

He is survived by his wife, June of Henderson; son Ferd and Lurline Wiens of Moundridge, Kan.; daughters, Susan and Dale Janzen of Central City, Joyce and Marcellus Wall of Aurora, Grace and Lester Zook of Deep River, Iowa, Luann Vaught of Sioux City, Iowa and Kathy and Blake Matousek of Witchita, Kan.; 19 grandchildren and their spouses; 57 great-grandchildren; and one great-great-grandchild; sister, Alma and Louie Siebert of Henderson and sister-in-law, Jeannie Kliewer of Henderson.

He is preceded in death by his first wife, Matilda; his parents; his brothers and their spouses, Henry and Augusta Kliewer, Ben and Olga Kliewer and Albert and Rachel Kliewer.

Graveside services will be held at 9:30 a.m. Friday, June 30, 2017 at the Mennonite Cemetery, 1 ½ miles south and 3 ½ miles east of Henderson. Memorial services will then be held at 10:30 a.m., Friday, June 30, 2017 at the Crossroads Bible Fellowship Church, ½ mile north of the Henderson exit.
​
Visitation will be held from 5 – 8 p.m. on Wednesday and 9 a.m. – 3 p.m. on Thursday at the mortuary in Henderson. The family will then greet friends from 5 – 8 p.m. Thursday evening at Crossroads Bible Fellowship. Memorials are suggested for Gideons International or Grace University, Omaha.