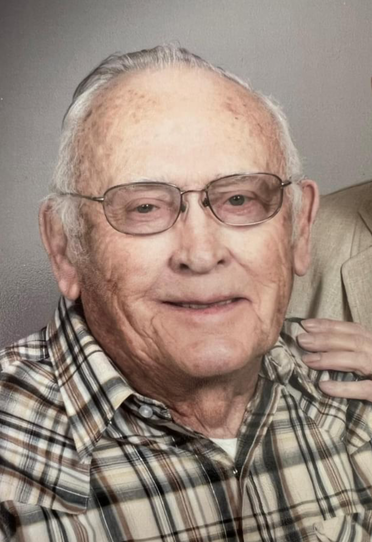 Howard was married to Patricia (Jones) for 68 years.  They were blessed with four children, ten grandchildren and ten great-grandchildren.  He served in the Naval Reserves for 8 years.  Howard worked as an electrician for over 40 years in the Bradshaw and York areas of Nebraska.  He was an avid ham radio and weather enthusiast.  He reported the weather for over 50 years to the U.S. Weather Service for the Bradshaw area.  In 2013 he received the Edward H. Stoll award for his diligent and continued voluntary support to the weather service.  He loved to garden, many times having enough to feed the family and their neighbors.  He was an avid model airplane enthusiast and Husker fan. Of course, his favorite time was spent with his family.

Services will be held at 11:00 am, Thursday, September 1, 2022 at the United Methodist Church in Bradshaw, NE.  Pastors Michelle Reed and Ford Shenk will be officiating.  He will be honored with military rights.  A luncheon will follow at the Church.  A private family inurnment will be held in Plainfield Cemetery, west of Bradshaw. Cremation. No viewing or visitation. In lieu of flowers, the family asks that you donate to the John Howard Romsdal Memorial.  A donation will be made by the family at a later date.
​
Condolences may be emailed to Metz Mortuary Messages will be given to the family.
Find our featured Mortuary in Family Services, Funeral Services and Grievance Services featured as a York, Nebraska Business in York Marketplace.
Location: Metz Mortuary | 109 South Lincoln Ave | York, Nebraska 68467 | Phone: 402-362-3351