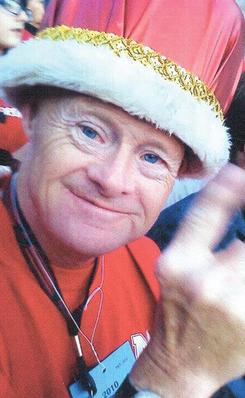 John Larry Buller, age 68, of Lincoln, died Jan. 13, 2018 at Aurora.
John Larry Buller was born on Aug. 13, 1949 at York, and was the second son of John B. and Susie R. (Janzen) Buller. John Larry was born with Down Syndrome, which just meant he tried harder. He spent his first years growing up on the family farm southeast of Henderson, just down the hill from Lushton.
John Larry started school in Lushton. He then attended school in Lincoln at LARC (Lincoln Area Retarded Citizens) when he was 9. He lived with the Whitaker family in Havelock. John Larry moved to Martin Luther Training Center in Beatrice when he was 16, as LARC was closing, living in their dormitories. After 2 years in Beatrice at the Martin Luther Training Center, he was placed at University of Nebraska, Cather Pound Dining Services (City Campus as he called it). He started work on Sept. 11, 1967, at the age of 18 in a brand new building. He washed pots and pans at the same sink until his last day of work in April of 2012. As some may know, that building was imploded in June 2017. And the remaining living halls of Cather Pound were imploded earlier this month. In 1967, while working in Lincoln, he lived with the Baker family, he then moved in with sister, Rachel Crumly, and her family in 1978 until she moved to Hartington in 1980. Moving to O.U.R. Homes, Independent Living, in Lincoln, where he lived for over 30 years.
John Larry did not want to retire, but health issues made the decision for him. He had enough unused vacation time to remain employed for an additional year, putting his total years of service at 46 at the same job. He met and made many wonderful friends while living in Lincoln. He moved to Bickford Cottages, Assisted Living in Grand Island in April, 2013, until his health again deteriorated, moving to Aurora Memorial Community Care in October of 2016, until his passing.
Anyone knowing John Larry knew when it was his birthday, because he told everyone. He had an unbelievable memory for birthdays. For most of his lifetime, he would send birthday cards to everyone he knew. While at UNL or “City Campus”, they had monthly birthday parties, some years he had more than one!
John Larry is survived by his brother, Paul (Linda) Buller; sisters, Lois (Larry) Roberts, Rachel (John) Crumly and Nancy (Jay) Wren. Nephews and nieces include: Tim (Rachel) Buller, Tom (Jennifer) Buller, Marci (Todd) Ochsner, Dennis (Candace) Roberts, David (Rachael) Roberts, Lindsey (Chris) Blevins, Elizabeth (Bob) Bradley, Preston (Allie) Crumly, Jared (Sarah) Crumly, RJ, Susanna, Micah and Jacob Wren. He is also survived by many great nephews and nieces, along with many other family members, and several friends, including special friend Angie Marlow of Lincoln.
He was preceded in death by his parents, and twin nephews Casey and Christopher Wren.
Funeral services will be held at 2 p.m., Friday, Jan. 19, 2018 at the Bethesda Mennonite Church, Henderson with the Reverend Jim Voth officiating. Interment will follow services at the South East Mennonite-Buller Cemetery, Henderson. Visitation with the family greeting friends will be held from 5 – 8 p.m., Thursday, Jan. 18, at the mortuary in Henderson. Memorials may be directed to the family for later designation.
Metz Mortuary, Henderson is handling arrangements.