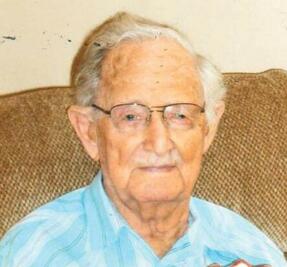 He was born March 5, 1918 at Oberlin, KS to James Arthur and Anna (Gustafson) Brandt and was a bread salesman since the age of 6. A World War II Veteran, he earned a Good Conduct Medal, a Marksmanship pin and an expert Rifleman pin as well. He was a member of the Eagles Lodge in Superior, NE, enjoyed dancing at the VFW and was an avid bird watcher. He loved building bird houses and was very work oriented. John was a wonderful father and grandfather and loved to be creative and worked hard in his 1/4 acre garden in his early years. On January 31, 1942 he was married to Laverna Hageman at Oberlin, KS.

He is survived by his wife Laverna of 75 years, their children and their families; Son John W. (Kami) Brandt of Ogallala, NE and his children Suzie (Aaron) Dexter of Thornton, Co, Logan and Jacob Dexter. Daughter Jodi Deaver of Denver, CO and her children, Arianna, Elliana, and Alliyah, Chelsea and Regie.

Funeral services are scheduled for 2:00 pm Thursday, February 2, 2017 at the Metz Chapel in York with the Reverend Mary Scott officiating. Burial will be in York’s Greenwood Cemetery. Family will greet friends one and half hours prior to the funeral service Thursday. Memorials may be sent to the family for later designation.​