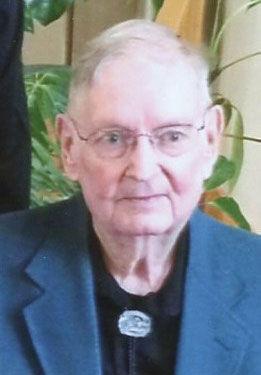 He was born March 30, 1933 to John L. and Clara (Jurgens) Bengtson at Hordville.  John graduated from Hordville High School in 1950. On Oct. 26, 1952, he was united in marriage to Marjorie Gretchen Schutt at Fridhem Lutheran Church in Hordville.

In 1953, John entered the United States Army Air Force and was stationed at Frobisher Bay Labrador. He served his country for two years. After returning home, he farmed near Central City. John also worked in sales most of his life, a large portion with John Deere and also with Larson Chevrolet. John and Margie moved to York in 1990. John was passionate about being with his family and was always there for his children and grandchildren.  He loved playing golf and was a member of the York Country Club. John was a member of Faith Lutheran Church in York and a member of the American Legion.

He was preceded in death by his parents; brother, John Ludvig at birth; sister, Iola Fowler and brother Willis Bengtson.

Funeral services are scheduled for 10 a.m., Monday, April 24, 2017 at Faith Lutheran Church in York with the Reverend Dr. Heath Trampe officiating. Burial with military honors will be held that afternoon at 2 p.m. at the Hordville Cemetery in Hordville. Visitation will be held on Sunday from 1-9 p.m., with family greeting friends that evening from 5-7 p.m. at the mortuary. In lieu of flowers, memorials may be directed to the family.​