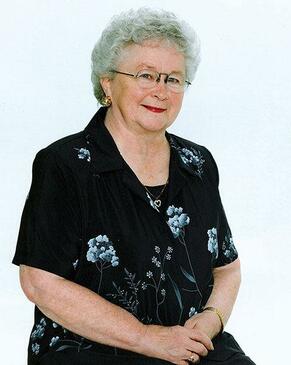 JoAnn Gayle (Dow) Jackson , beloved mother, grandmother and great-grandmother passed away peacefully in York on Jan. 4, 2017 at the age of 84.

Born in a blizzard on April 3, 1932, in Brady, to Alvie and Mildred (Northrup) Dow. JoAnn was the middle of three sisters, with older sister, Barbara and younger sister, Marilyn. The family lived on several farms in Thayer County before finally settling on a farm in Belvidere. JoAnn attended Belvidere High School where she made many life long friends, graduating in 1949.

Following graduation, JoAnn attended college in Fairbury earning a teaching certificate. She taught for a year in Thayer County teaching 13 children in seven grades at a country school with a wood burning stove and no running water.

JoAnn married Fred Jackson, her high school sweetheart, in 1951. They drove her $200 Chevrolet to Alamogordo, N.M. where Fred served in the Air Force. JoAnn worked as a clerk at the military base until her first of six children was born.

She was artistically gifted and enjoyed ceramics, painting, sewing and quilting. Everyone in the family received a beautiful quilt lovingly made by JoAnn as she celebrated all occasions, be it a birth, a graduation or a wedding giving her handmade gift to be treasured forever. As a member of the York Quilt Guild, she participated in many projects sewing quilts for those in need.

JoAnn and her family moved to York in 1974. JoAnn co-owned The Bottle Shop, then worked at York State Bank until celebrating her retirement in 1995. She continued working as a seamstress for Tom’s Clothing for several years. Although she had many jobs, her family would tell you that her life’s work was dedicated to loving them.

JoAnn was the matriarch of a large, loving family. She is survived by her children Cathy Jackson of York, Karen (Ken) Jackson of Santa Cruz, Calif., Rick (Rochelle) Jackson of Sutherland, Sandy (Bob) Bettger of Fairmont, Sue (Kip) Watkins of Tucson, Ariz. and Jan (Leon) Holloway of Lincoln; her sisters, Barbara Frieden of York and Marilyn Widler of Geneva; 13 grandchildren and 17 great-grandchildren.

Preceding her in death were her parents, Alvie and Mildred Dow and brothers-in-law, Ronald K. Widler and Claton Frieden.

Funeral services will be held at 2:30 p.m. Saturday, Jan. 7, 2017 at the Congregational United Church of Christ in Belvidere. Interment will follow services at the Belvidere City Cemetery. Visitation will be from 5-8 p.m. Thursday and 9 a.m. – 8 p.m. Friday at the mortuary, with the family greeting friends Friday evening from 6-7:30 p.m.

Memorials may be directed to the family for later designation to causes dear to JoAnn.​