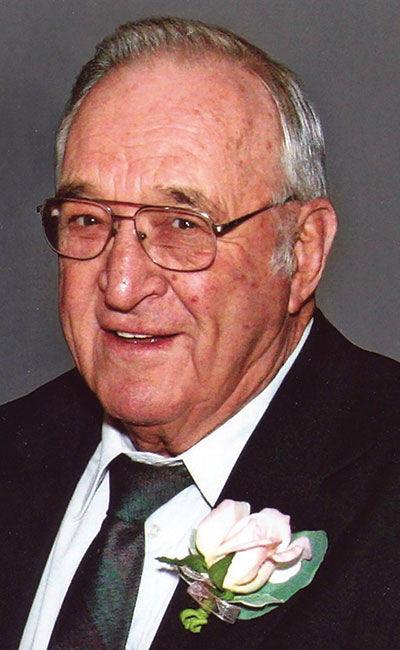 Jerry graduated in 1947 from Sutton High School where he lettered in football and boxing. He was the Nebraska Prep Boxing Champion for his weight class two times, and Sutton won six state titles in seven years in the early to mid1940’s.
On Sept. 3, 1951, he was united in marriage to Elizabeth Elaine Anderson at St. Joseph Catholic Church in York, and to this union, three children were born: Mike, Jeri, and Dan.

Jerry was a long time farmer in York County. He enjoyed the outdoors, especially fishing. Jerry was in Army National Guard and a member of St. Joseph Catholic Church, where he served as an acolyte. Jerry was also a member of the York Elks Club and the Knights of Columbus.

He is survived by his son, Mike (Rita) Leininger of Sidney; daughter, Jeri (Mike) Cunningham of Lincoln and son, Dan (Mary Jo) Leininger of York; grandchildren, Angie (Phil) Johnson of Omaha, Kristin (Corey) Minchow of Omaha, Daniel (fiancé Alyssa Wenzl) Cunningham of Lincoln, Patrick (Ali) Leininger of Omaha, Tom Leininger of Atlanta, Ga., Tim Leininger of Hastings and Kelly (Matt) Whipple of Sidney and step-grandchildren, Jameson and Jared Rupert of Lincoln. He is also survived by his great-grandchildren, Jacob Darling, Emily and Olivia Johnson and Elsie and Nathan Minchow all of Omaha, Violet Cunningham of Lincoln, Preston Leininger of Omaha, with another Johnson great granddaughter on the way, along with his sister Marilyn (Tanny) Reinsch of Geneva and numerous nieces and nephews.
​
He was preceded in death by his parents; wife; sister and brother-in-law, Marcella (Vernon) Heinz; brother in-law and sister-in-law, Harold and Lois Anderson and three nephews, Ronn Anderson, Chuck Heinz and Patrick Reinsch.
A Mass of Christian Burial will be held 10 a.m. Wednesday, Sept. 13, 2017 at St. Joseph Catholic Church in York with the Reverend Monsignor James Reinert officiating. Interment will follow at St. Joseph Catholic Cemetery, York. A Rosary service will be held at 6 p.m., Tuesday, Sept. 12, 2017 at the mortuary. Visitation will be held from 5-8 p.m. Monday and then from 9 a.m. - 8 p.m. Tuesday with the family greeting friends after the Rosary service. In Lieu of flowers or plants, memorials may be directed to St. Joseph Catholic Church or to the family for later designation.