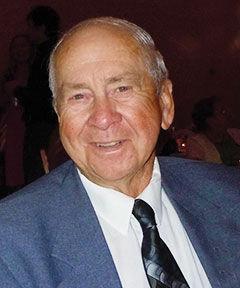 Jim attended Rosemond School by Utica until he was in 3rd grade. Then he moved to District 51, north of Waco, for grades 4-8. He attended and graduated from Waco High School in 1949. He participated and excelled in basketball, baseball and track, especially pole vault, during these years.

During the Korean Conflict, he was in the Army and was based out of Missouri and Kansas. He came home to take care of his father who had been injured in a tractor fire. He later served six years in the Army Reserves and did summer training at Colorado Springs. After his service, he began farming in and around the Waco/Utica area.

Jim was well known for his years of service to the Waco community as a baseball coach, umpire, and league manager. He coached several baseball and softball teams at all age levels and enjoyed traveling to games and watching children grow through their experiences in sports. He was also a member of the school board that helped to consolidate the three towns of Waco, Utica and Beaver Crossing into a new school during Nebraska’s centennial year - thus naming it Centennial. His service to the community and commitment to youth sports and educational programs was well acknowledged through his years. Above all, he was a dedicated husband and a loving father, grandfather, and great-grandfather who will be missed dearly by his family and friends.

A Mass of Christian Burial will be held at 10 a.m. on Monday, April 18, 2016 at St. Joseph Catholic Church in York with Monsignor James Reinert officiating. Burial will follow in the Waco Cemetery, Waco. A rosary will be said Sunday at 6 p.m. at Metz Chapel. Visitation will be held from 1 – 9 p.m. Saturday and Sunday at the mortuary. The family will greet friends after the rosary on Sunday. Memorials may be directed to the Knights of Columbus, American Legion Post #49 and the VA.  ​