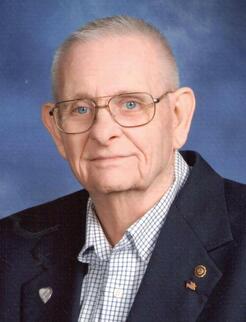 He graduated from York High School in 1955 and served in the military as a Navy flight engineer from 1955-1958. Following his honorable discharge he attended Kearney State College. He was a Master Electrician and owned and operated Lundy Electric in York. Jim was united in marriage to Janice Opitz on Jan. 26, 1962 in York. He was a member of the Arbor Drive Community Church, Odd Fellows, York Volunteer Fire Department, York Elk’s Club and he had a passion for woodcarving and the Nebraska Cornhuskers. For many years he was a leader in the Boy Scouts of America.

Left to cherish his memory are his children, Sam Burnham, wife Beth, and their children, Rebecca Shafer and Aaron Shafer all of Henderson, Randall Burnham, wife Paula, and their children Jonathan and wife Beth of Lincoln and Sarah and husband Bryce Bloch of Lincoln and Patricia Kroeker and her husband Max of Henderson. Also surviving are other family members and a host of friends. Jim was preceded in death by his parents and his wife.

Funeral services will be held at 10 a.m. on Tuesday, Nov. 3, 2015 at the Arbor Drive Community Church with the Reverend Jon Hawkins officiating. Interment with military honors will be in York’s Greenwood Cemetery. Visitation will be from 1-9 p.m. on Sunday and from 9 a.m. – 9 p.m. Monday at the mortuary. The family will receive friends Monday evening from 6 -8 p.m. Memorials may be directed to the Arbor Drive Community Church.  ​