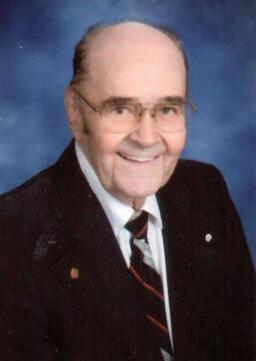 He was married to Mary Lou Stingley on Nov. 13, 1948 in Creighton. Three daughters were born to them, LaDonna (Wallace) Johnson; June (Mark) Austin and Jacque (Kenneth) Meisinger.

He was a member of York First United Methodist Church; the Elks; Eagles; Masons and Sesostris Shrine. In his various moves around the state he was very active in their Chambers of Commerce and other civic groups and in the local churches.

Preceding him in death were his parents; his daughter, LaDonna; brother, Gary; and his parents-in-law, Troy and Emma Stingley as well as many other family members.

Funeral services will be held at 10:30 a.m., Tuesday, Aug. 16, 2016 at the First United Methodist Church in York. Interment will be held at the  Greenwood Cemetery in York.  Visitation will be from 1-9 p.m. Sunday and from 9 a.m. - 9 p.m. Monday at the mortuary. The family will greet friends prior to the service at the church from 9:30 a.m. until service time. Memorials may be directed to the First United Methodist Church or the donor’s choice.​