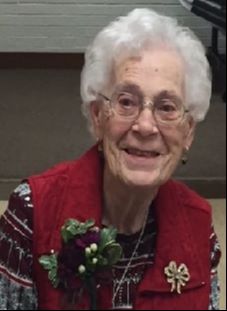 Irene was baptized May 16, 1948 and joined Bethesda Mennonite Church in Henderson.  On December 1, 1948 she married Abraham Levi Block. They moved to Dallas, Oregon and she became a member of the Mennonite Brethren Church in Dallas. In 1966 they moved to Henderson, NE and joined the Mennonite Brethren Church. She taught Sunday school and Wednesday night classes for many years. She enjoyed gardening, canning, quilting and crocheting. To this union 3 children were born, Steven, Charles and Susan.

She is survived by Lynette Block (Steven), Chuck (Karla) Block, and Susan (Bruce) Hiebner,  all of Henderson. Her grandchildren include: Kara Block and Brian Davis and their children Teven and Bowen of Culver City, CA, Krista and Dan Trimble and their children Joy and Elaina of Pender, NE, Adam Block of Omaha, NE, Amber Block of Kansas City, KS, Alex Block of Auburn, NE, Stacey and Jonathan Yost and their children Kaci, Everett, Reese and Ryker of Edgar, NE, Ashley and Nicholas Nienhueser and their children Paige, James and Atley of York, Connor and Abigail Hiebner and their daughter Emerson of Lincoln, NE. Also surviving is her brother Abe and Alice Buller of Henderson and her sister Frieda Noel of Boise, ID.