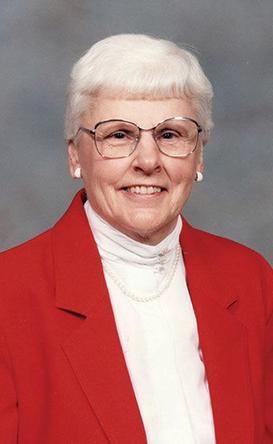 Ina M. Ehlers, age 97 of York, died Monday, Nov. 27, 2017 at York.
She was born Jan. 13, 1920 to William G. and Laura (Gruber) Ehlers near Thayer. Ina was baptized on Feb. 15, 1920 and confirmed on May 27, 1934 at Zion Lutheran Church at Thayer. She attended elementary rural school District 70 and graduated from high school at Thayer. Ina also attended Business School at York College. She started her career at the Farmers Home Administration in York and later was transferred to Aurora, Fairbury and then to Lincoln, where she worked until her retirement, moving to York in 1981. Her career spanned 30 years with the FHA.

​While in Lincoln, Ina volunteered at Bryan Memorial Hospital and served in the library of the men’s penitentiary in Lincoln and continued that work after moving to York to working at the Nebraska Center for Women in York. Ina was a member of Emmanuel Lutheran Church, where she served on many committees, as well as, being a member of Lutheran Women’s Mission League. Other organizations for which Ina volunteered include: the York County Bloodmobile, York General Hospital Auxiliary, and York General Hearthstone.
Ina was also a member of the Friendship Club and Lamplighters Extension Club. Ina enjoyed traveling, reading, card playing, and spending time with her family and friends.
Ina was preceded in death by her father and mother; brothers, Ivan and Lowell Ehlers and sister, Bernice Rathje.
She is survived by her sister, Doris Pickrel and nieces and nephews, Sharon Rathje, Jeanne Sue Pickrel, Linda Ehlers, Lyle Rathje and Merle (Donna) Ehlers; great-nephews, Jeffrey (Michelle) Ehlers, Eric (Tara) Ehlers; great-great nieces and nephews, Allison, Amanda, Ryan, Drew and Zach Ehlers.
Funeral services are scheduled for 10 a.m., Friday, Dec. 1, 2017 at Emmanuel Lutheran Church, York. Burial will follow in Greenwood Cemetery, York. Visitation will be held on Thursday from 1-8 p.m., with family greeting friends from 5-7 p.m. that evening at the mortuary. Memorials may be directed to Emmanuel Lutheran Church.
Condolences may be emailed to Metz Mortuary Messages will be given to the family.
Find our featured Mortuary in Family Services, Funeral Services and Grievance Services featured as a York, Nebraska Business in York Marketplace.
Location: Metz Mortuary | 109 South Lincoln Ave | York, Nebraska 68467 | Phone: 402-362-3351