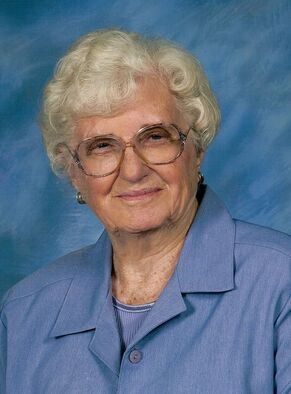 Imo Richardson, age 100, formerly of Benedict, NE died Monday June 13, 2022 in Elkhorn, NE. She was born on March 30, 1922 to Gilbert and Delia (McAdams) Hultquist at Blessing, Texas. She was married to George Richardson, Jr. at her home in El Campo, Texas on in 1950. They lived on the farm near Benedict where George was born.
​
She received a B.S. degree in English and Library Science from Sam Houston State in 1946. She taught at Vidor, Texas high school from 1942 to 1945 and was librarian at Carr Junior High School in Orange Texas from 1945 to 1950. She attended Louisiana State University in Baton Rouge in the summers of 1947 through 1950 and earned a M.S. Degree in Library Science in 1950. She was librarian at Bradshaw High School from 1967 to 1969. She was librarian for half days at Benedict High School from 1969 to 1979, retiring in May 1979 so she could travel with George in the wintertime. They travelled to many different countries on all continents except Antarctica.

A graveside service will be held at 9:00 am. Friday, June 24 at the Pleasant Hill Cemetery at Benedict. A memorial service will then be held at 10:00 am at the First Evangelical Lutheran Church in York with the Reverend Rob Garton officiating. Cremation. No visitation. Memorials may be directed to her family for later designations.
​
Condolences may be emailed to Metz Mortuary Messages will be given to the family.
Find our featured Mortuary in Family Services, Funeral Services and Grievance Services featured as a York, Nebraska Business in York Marketplace.
Location: Metz Mortuary | 109 South Lincoln Ave | York, Nebraska 68467 | Phone: 402-362-3351