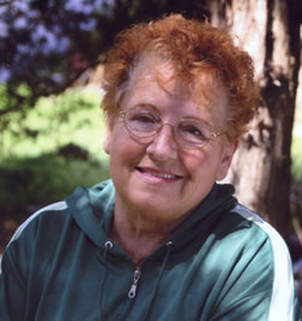 Imelda “Red” McCoy, age 80 of Fairmont, NE died Thursday, July 19, 2018 at Fairview Manor, Fairmont, NE. She was born on January 13, 1938 in rural Harlan County to George and Christina (Kass) Willms. She was raised on the farm in Orleans, NE with her four brothers and two sisters. She graduated from York High School in 1956 and started working with the telephone company. On May 16, 1957 Red was united in marriage to Robert “Bob” McCoy at York, NE and they had four children. Red worked her entire life raising her children and working at various jobs until she retired. She wintered 12 years in Texas with Bob after retirement. Red loved bowling, bingo, cooking, red hats, cards, and games. Red treasured her family and loved spending time with her husband (whom passed away April 16, 2018), children, and grandchildren.

Graveside services will be held at 2:00 pm, Friday, July 27, 2018 at Greenwood Cemetery, York.  Cremation.  No viewing or visitation. Memorials may be directed to Fairview Manor Activities Department.