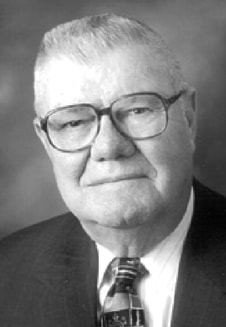 He was born March 14, 1921 in rural Benedict, NE to Evan and Vera (Robertson) Miller. He graduated from Benedict High School in 1938 and then attended the University of Nebraska for 2 years. On January 20, 1946 he was married to Bernice Lenore Alma at David City, NE.
Holly served his country in the United States Army spending 3 years in north Africa in the Signal Corp. Owner of Miller Seed & Supply from 1949-1996. He loved being a loyal Husker fan, American Legion Baseball sponsor, enjoyed fishing, traveling and “his word was his bond’ in business. His faith was very important to him.

An active member of the First Presbyterian Church in York Holly served on many church boards including being an Elder. He was a longtime York area supporter having been involved in numerous activities over his lengthy business career. He was a 60 year member of the Masonic Lodge AF and AM., past commander York American Legion Bolton Post #19, past President of the York Area Chamber of Commerce, the Chamber Ambassadors, board member of the LEAD program, past president of the York Community Foundation, vice president of the York General Hospital Board of Directors and York General Hearthstone Board of Directors. Also served on the Advisory Board of the UNL Ag Campus, active in the York Rite Sesostris Shrine, Past President Nebraska Seed Traders Association and the Nebraska Fertilizer and Chemical Association, and was inducted to the York area Agriculture Hall of Fame.

​Funeral services were held at 10:00 a.m., Wednesday, February 28, 2018 at the First Presbyterian Church in York with the Rev Dr. Michael Eickhoff officiating. Burial with Military Honors in York’s Greenwood Cemetery. In lieu of flowers, memorials may be directed to the First Presbyterian Church of York, York General Hospital Foundation or to the York Community Foundation.