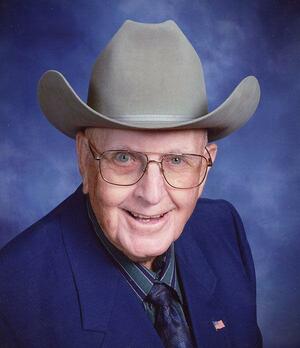 He was born April 17, 1930 in a little square house in Custer County, NE to Herbert and Alma (Allberry) Mowrey. He attended “The Pilot” grade school in Elk Creek Township and then graduated from Miller High School. He then joined the United States Air Force on July 14, 1951 and was discharged on April 28, 1955. On November 25, 1956 he was married to Delores “Dee” Gross in Kearney, NE. After her death in May of 2014, he was married to Jane Thorne on September 19, 2015 at York. For over 37 years Herb was employed at Moorman Manufacturing until his retirement.

Herb was a member of the First United Methodist Church in York and the York Masonic Lodge #56 A.F. & A.M. He enjoyed going to Branson, MO and serving watermelon with Bud Bolte to 4-H kids at the York County Fair. He enjoyed Attending family events and all kinds of dancing and attending many music festivals. He felt greatly honored when he was chosen to be honored by the York County Cattleman Association in 2002.

He is survived by his wife Jane of York, his son Kirt and his significant other Tammy Stone of Lincoln, and his daughter Sheryl (Mike) Broadway of Grand Island, NE; grandchildren: Autumn (Brian) Kwiatowski, Travis, Jason, and Scott Mowrey, Brian Broadway, Amy (Brandon) New; and nine great grandchildren.

Also surviving is a step son Ron (Jackie) Thorne, and family, of Raymond, NE and a step daughter Sally Bennett and family of Lincoln; nieces, nephews, and a host friends.

Herb is preceded in death by his parents, first wife Dee, one grandson, and two brothers.

Funeral services are scheduled for 10:00 a.m., Tuesday, April 11, 2017 at the First United Methodist Church in York with the Reverend Art Phillips officiating. Graveside services will be held later that afternoon at 2:00 p.m.at the Westlawn Cemetery in Grand Island.
​
Visitation will be held Monday from 1:00 p.m. to 8:00 p.m., with his family greeting friends later that evening from 6:30 -8:00 p.m., at the mortuary. Memorials may be directed to the First United Methodist Church, Wessel’s Living Farm in York, or to the family for later designation.