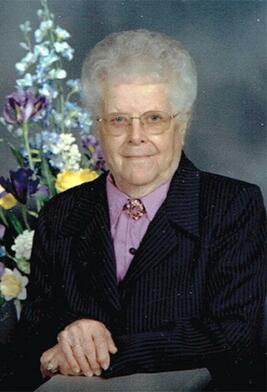 She met her future husband and lifetime soulmate Richard (Dick) at school and they were united in marriage on June 28, 1941. To this union three sons were born, Dennis G. Hager (Diana), Virgil L. Hager and Roland (Rollie) Hager. Early in their marriage they spent a short time in California as Dick worked in the North American B-25 Factory and she worked in a soda fountain/pharmacy. About this same time Dick was drafted into the Army and she ended up traveling a lot across the United States with their son Denny by train following her husband to various military bases until he was called overseas during World War II.

After the Japanese surrender and his discharge from the Army they started farming in York County eventually settling West of McCool, where they farmed and raised cattle for approximately 40 years before retiring to York. Over all those years of farming including a home destroyed by fire, she milked many a cow, drove many a tractor, fixed many meals for a lot of folks, worked countless hours for her church which she loved, helped quilt many a quilt with the “quilt ladies” of the church, along with serving on many committee’s for the church and other civic organizations. She was a friend to many and lived a very long hard working, but enjoyable life.

She was predeceased by her parents Robert and Clara (Smith) Young; husband Richard E. Hager; daughters-in-law, Nancy Hager and Roxann (Ann) Hager; her brother, Boyd Young and a host of other relatives and close friends.

She will be missed by all, but she treasured all of you that knew her. She has lived a Good Life and her journey on earth is complete.

Funeral services will be held at 10 a.m. Monday, Feb. 22, 2016 at First Evangelical Lutheran Church in McCool Jct. with the Reverend Becky Sells officiating. Interment will follow in Pleasant Ridge Cemetery in McCool Jct. Visitation will be held at the mortuary from 1-9 p.m. on Sunday with the family greeting friends from 1:30 - 3 p.m. Memorials may be directed to First Evangelical Lutheran Church-McCool. ​