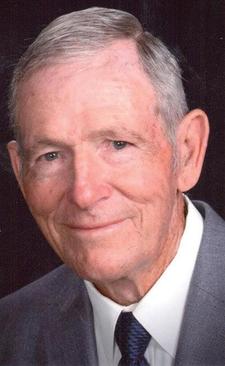 Harvey Pickrel, age 78, of Benedict, died Friday, Nov. 10, 2017 at York after a long battle with cancer.
He was born April 8, 1939 in rural York County to Harvey H. and Byrdine (Churchill) Pickrel. He attended District 17 Broadwell Country School, southwest of York and graduated from Benedict High School in 1956. He then graduated in 1960 from the University of Nebraska-Lincoln with a bachelor’s degree in Agricultural Economics.
After he graduated from UNL, Harvey returned to the family farm north of Benedict. He was united in marriage to Janice L. Watson on Aug. 4, 1963 at the East Avenue United Brethren Church in York and together they worked on the farm for 54 years. They were blessed with two children: Lori and Clark. Harvey loved sports, especially golfing with his buddies and family. He always enjoyed attending his children’s and grandchildren’s activities over the years. Harvey was a member of the First United Methodist Church in York.

Harvey is survived by his wife, Janice of Benedict; daughter, Lori (Zach) Suddarth of York; son, Clark (Sandi) Pickrel of York; grandchildren, Wyatt Suddarth of Omaha, Jarrett (Mycah) Suddarth of Lincoln, Grant Suddarth of York, Collin Pickrel, Carlie Pickrel, and Cassandra Pickrel, all of York, and step-grandchildren, Preston (Paige) Jacobe of Seward and Nathan Jacobe of Lincoln. He is also survived by his sister, Bonnie (Elden) Heiden of Las Cruces, N.M., nieces, nephews, cousins, and friends. He was preceded in death by his parents.

​Memorial services are scheduled for Monday, Nov. 20, 2017 at 11 a.m. at the First United Methodist Church of York with the Reverend Art Phillips officiating. A private family inurnment will follow cremation. Family will greet friends from 4:30 - 6 p.m. on Sunday, Nov. 19, 2017 at Metz Mortuary in York. In lieu of flowers, memorials may be directed to the First United Methodist Church Foundation or to the family for later designation. Metz Mortuary is handling arrangements.