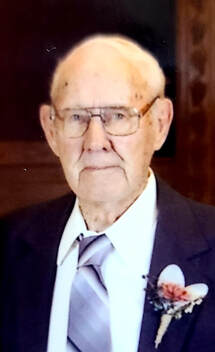 Harvey H. Smith of Henderson, Nebraska passed away on October 2, 2021 at the age of 88 at Henderson.  He was born to Henry H. and Margaret (Friesen) Smith on March 20, 1933 on his Grandpa Friesen’s farm west of Henderson in Hamilton County. Harvey attended country school at District 11 west of Henderson and District 51 north of Hampton.  He attended high school at Hampton.

Harvey realized his need of salvation during his junior high years while attending church in Hampton.  In 1952 he was baptized upon his confession of faith at the Bethesda Mennonite Church in Henderson.  During his childhood he enjoyed listening to the Old-Fashioned Revival Hour with his family and he enjoyed singing Heavenly Sunlight with his dad. From 1953-1955 Harvey completed 2 years of I-W Service working at the General Rose Memorial Hospital in Denver, Colorado.  Many lifelong friends were made during those years of service.

On June 7, 1955 he was married to Marjorie Friesen at the Bethesda Mennonite Church in Henderson.  Four children were born to this family, Kelvin, Roy, Lavonne, and Laurel.

He spent his lifetime farming and working at many different jobs through the winter months.  Jobs either in construction and carpentry and many years for Smith Plumbing and Heating in Hampton.  He enjoyed working in his woodshop building many dollhouses, barns, and farm buildings for his children and grandchildren.

After retirement he enjoyed doing volunteer work spending many hours working at the Henderson Mennonite Heritage Park, helping friends, or when called upon at church.  He loved working at the MCC Canner and helping on the funeral committee.

Graveside services will be held 9:45 am., Wednesday, October 6, 2021 at the Bethesda Cemetery northeast of Henderson. A Memorial service will follow at 10:30 am., at the Bethesda Mennonite Church in Henderson. The memorial service will be livestreamed on the church’s website at http://bethesdamc.org/. Visitation will be from 1-9:00 pm., Tuesday with his family greeting friends later that evening from 7-9:00 pm, at the mortuary in Henderson.  Memorials may be directed to the Bethesda Mennonite Church or Henderson Heritage Park.


​
Condolences may be emailed to Metz Mortuary Messages will be given to the family.
Find our featured Mortuary in Family Services, Funeral Services and Grievance Services featured as a York, Nebraska Business in York Marketplace.
Location: Metz Mortuary | 109 South Lincoln Ave | York, Nebraska 68467 | Phone: 402-362-3351